Santorini (Thira) International Airport is an airport in Santorini/Thira, Greece (IATA: JTR,ICAO: LGSR). The airport serves both as a military and as a civil airport.

Santorini is one of the few Cyclades Islands with a major airport. It is about 6 km southeast of the centre of Thira. The main asphalt runway is 6972 feet/2125m in length. The parallel taxiway was built to runway specification. It can accommodate Boeing757, Boeing 737, Airbus 320 series, Avro RJ, Fokker 70, and ATR 72.  Transportation to and from the air terminal is through buses, taxis, hotel car-pickups and rental cars. In 2014 the airport served 1,179,653 passengers, an increase of 31.3% over the previous year’s traffic.

The airport first operated in 1972

In December 2015 the privatization of Santorini (Thira) International Airport and 13 other regional airports of Greece was finalized with the signing of the agreement between the Fraport AG/Copelouzos Group joint venture and the state privatization fund. “We signed the deal today,” the head of Greece’s privatization agency HRADF, Stergios Pitsiorlas, told Reuters. According to the agreement, the joint venture will operate the 14 airports (including Santorini (Thira) International Airport) for 40 years as of 11th April 2017.

View all Airports
View all Countries

As part of its mandate for taking over management and operations at the 14 airports, Fraport Greece has prepared a comprehensive plan for the modernization and development of the airports. The company’s plan includes immediate projects and development works for upgrading the airports’ facilities, which will contribute significantly to improving the overall customer travel experience, while responding to the expected increase in passenger traffic. Fraport Greece will invest a minimum of 400 million euros for development works until 2021. During the 40-year concession period the company will implement additional maintenance and upgrading works, as well as capacity expansions (dependent on traffic growth) — resulting in possible total investments of some 1 billion euros.

The plans presented by Fraport Greece include the construction of a new fire station, the expansion and remodeling of current terminal and the reorganization of the apron. The total size of the terminal will increase by 235% at 15.640 m2 with the replacement of a part of the current terminal and the construction of a new one. Significant interventions for the improvement of services will also be implemented, including: 112% increase in Check-in stations, 100% increase baggage reclaim belts, 20% increase in the total number of gates and 250% increase in security lanes. 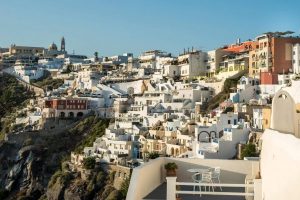 Crescent-shaped Santorini is one of Greece’s most popular islands with good reason. It is famous for its sensational blazing sunsets, the archaeological ruins called Akrotiri or the Greek Pompeii, beautiful whitewashed villages and unique volcanic beaches. What is most unique is what mother nature left behind.The sight of Santorini’s flooded caldera, a volcanic crater that sits in the depths of Aegean, can be perfectly viewed from the clifftop towns of Fira and Oia. The vantage point from these whitewashed villages, at 1,100 feet high, is simply spectacular. There, beautiful and traditional cave hotels have been built into the landscape and spectacular views are guaranteed from the many restaurants, bars and cafes built there. 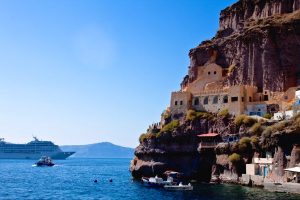 The Santorini Airport is quite  busy during the summer, so that Airport parking slots for jets and helicopters can be limited – so we advise to book your flight as far ahead as possible.

Travelers looking to reach the Santorini this summer may be disappointed, if they haven’t yet booked their Private jet or Helicopter. According to past years, landing demand is so moderate that the Santorini’s island’s airport is forced to turn away private jets at peak times – with some switching to helicopters instead.

Bar Hoping at Mykonos from Santorini via Helicopter

Day Trip from Santorini to Mykonos by helicopter

Pay by the seat not by the helicopter.