Known both as the «smallest of big cities», or the «city of peace», Geneva, among other things, is home to the European headquarters of UNO. The quayside of Lake Geneva, the parks, the old alleyways and smart boutiques are an invitation to a leisurely stroll.

Geneva is linked to Europe’s capital cities by its international airport, motorways and railway network. It is the seat of a number of major multinationals, as well as the International Red Cross Committee.

What is so special about Geneva for the Swiss and the rest of the world? The answer is that it has far greater international influence than any other city of 200’000 inhabitants. Today, Switzerland’s second largest city is home to around twenty international organisations. The permanent missions of over 160 States represent their governments in the city’s international conferences and organisations.

Geneva is a center focused on the international economy. Whether private corporate or business, finance, in its widest sense, undeniably plays a major economic role in Geneva, which is a base for around a hundred foreign banks.

CALL US FOR MORE
E-MAIL US FOR INFO

Top 10 Things To Do In Geneva 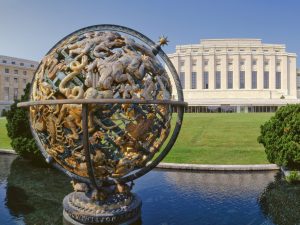 An air of peace and the winds of freedom.

Built between 1929 and 1936 and located at the heart of the Parco de l’Ariana, the Palais des Nations houses the European headquarters of the United Nations, and is the largest UN center after New York. More than 25,000 delegates pass through the center each year, and many works of art are on display there. Furthermore, the Palais opens its doors daily and provides fascinating guided tours!